I left Spain for a flying visit to the UK with ears still ringing from Órgiva’s annual Cristo festival. By 2.30am the previous Saturday our enthusiasm for our town’s seemingly insatiable appetite for fiestas had worn a little thin. As the sound of the last of thousands of euros worth of fireworks ricocheted around our valley, we understood a little better how living in a war zone must be. The “guns”, which had been blasting at intervals for two days, finally fell silent in those early hours.

The last crescendo marked the return of the virgin Dolores (the Virgin Mary when in pain and grief) to her place in Órgiva’s 16th century Baroque church, bringing an end to the annual Processión del Cristo de la Expiración, or Dia del Señor, which marks a “sighting” of the man himself in the town. Gunpowder features heavily in Andalucia’s troubled history and almost 500 kilos of fireworks was estimated to have been spent throughout the 48 hours of Cristo, during which Christ on his cross is taken from the alter and paraded around the town, accompanied by the town band, military drummers, women in black, hoards of locals, displays of emotion and, of course, Dolores. The sometimes terrifying and isolating salvos of rockets with their accompanying white smoke are said to keep the devil away while the pair are off guard.

Who is to say whether the performance is religion, theatre, culture, a boost for local businesses and tourism (the hotels were full), or all of the above. But it was a bit of a disaster for one high street bank a few years ago, when the force of the rockets blew in its windows. 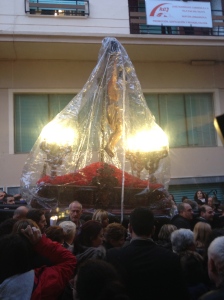 All lit up, with places to go

This year’s spectacle suffered the misfortune of dramatic Spring storms, which brought hail and rain onto the parade and forced the two effigies to return home a little ahead of schedule. A friend involved in the carrying of Dolores (who, unlike her son, didn’t have the protection of a raincoat) described her remarkable, and comical, turn of foot, velvet robe streaming behind her, as her bearers, some of whom had sneaked a few bar stops during the procession, ran the last leg to the church steps.

The days since Cristo have been but a temporary ceasefire. It’s Semana Santa (Holy week), so the rockets are active again, breaking the peace of a glorious early morning. Dolores held a feast for her followers at her “club” in town last night, and the (by then risen) Christ will be paraded again on Easter Thursday. I bought a box of earplugs at the airport in anticipation.

Stopping the car to retrieve the tapa plana (cloth cap) of an elderly man battling his way through Orgiva town with his burro (ass) in the recent high winds got me thinking about the potential effect of the privatisation of common lands.

The burro was carrying a heavy load of grasses, no doubt food for its owner’s goats, painfully cut from the harsh ground. Several herds of goats and sheep are moved around the various areas of open land here. Goatherds may own a barn to shelter their animals at night, but few own land. They are, literally, farming without land.

In the UK, progressive enclosure of common land since the 12th century, but particularly during the 17th century onwards as a result of the enclosure Acts, deprived the majority of people of access to agricultural land while enriching a few and establishing the model of private property over collective rights.

Capitalism grew from the creation of an industrialised working class, forced from the land to the factories.

A neighbour told us how they had argued with a local goat farmer over the grazing of his herd on land the British man had bought and was cultivating olive and orange trees on. The farmer claimed a right to graze his capra on it. The inevitable outcome of the row was the enclosure of the disputed ground. The goatherd was forced to move his animals elsewhere, but (and I do not blame the owner of the land for building his fences – we all shut our gates when we hear the goat bells), it was a further, possibly inevitable step, towards the loss of common land.

If such lands continue to provide a peasant farming community with a means of survival in 21st century rural Spain, an alternative to the market, then perhaps the sustainability of economies such as these will continue.

And the tourists and long-stayers who come here to escape overcrowded cities, creeping urban sprawl and ordered hedgerows will continue to be charmed. This might sound patronising, but their importance for local business is immeasurable.

The American poet Robert Frost said: “Don’t ever take a fence down until you know why it was put up.” Perhaps not putting one up until the consequences are known might be more apt.