In the famous car chase scene of the 1968 classic movie Bullitt, Steve McQueen’s Mustang passes the same green VW Beetle at least four times while he chases the black Dodge. This was of course a continuity error, with the chase scenes being intercut and reused. But on a recent trip to enjoy the Sierra Ne

vada en verano (in summer), just 1.5 hours drive from Órgiva, we became increasingly convinced that the footage of our own trip was somehow being replayed.

I first noticed the 4×4 as I stood on the balcony of our hotel room shortly after checking in. Glancing up the road to where our car was parked, I saw the smart white vehicle with an unusual red number plate pulling in behind it. But then the driver seemed to change their mind, swinging out suddenly and racing down the road into town.

It should be said that Europe’s most southerly ski resort village of Pradollano, high above Granada, does not have a problem with heavy traffic or a lack of parking at this time of year. Our decision to spend a couple of nights at well over 2,000 metres above sea level was down to cheap deals at one of the few hotels open while the ski station markets itself as a mountain biking and hiking centre, along with a need for cooler temperatures. The advertising is working to an extent, but staff working at restaurants dotted around the almost deserted plaza were clearly relieved to have our business.

Moments after seeing the white car, it returns and repeats its actions, almost parking up before quickly gliding away. Pradollano’s main road comes in from the mountain, goes through the town, out again onto the mountain road and circles back in. Even a formula 1 Ferrari at top speed on the streets of Monaco could not complete a lap that fast.

Puzzled, I stay on the balcony. I call my daughter over, and wait. And there it is again, the shiny 4×4 with the red plates, moving in behind our car, then off again. I share my bewilderment, but somehow she hasn’t seen the vehicle, and I begin to doubt my eyes. Am I being bugged by a metaphorical green Beetle?

Next morning, same story. While I stay on the balcony I spot the car several times. It dawns on me that there must be more than one. It stops briefly directly across the road and I note a number on its rear flank. Does it have a driver? Are they watching me?

Finally, sitting at a restaurant as the sun begins to set, we all see the car. In fact we see two together, and the nagging fear that I’ve somehow become the Prisoner’s Number Six, imprisoned in a mysterious village, trapped by balloon-like “rovers” that prevent escape, dissipates.

Quite why there should be two, or maybe more,

identical cars continually driving around this empty pueblo remained a puzzle. We think we spotted a Lexus logo, but the red plates, the numbers on the sides and the lack of anything indicating a model were odd.

As we headed home down the mountain we passed a convoy of UK-plated “camouflaged” cars and lorries, the black and white funky swirls disguising shapes and brands. The trucks were huge, and each carried or towed enclosed steel containers. And finally it dawns on us. The Sierra Nevada in summer, when roads are empty and tourists are few, provides the perfect base for automakers to carry out secretive prototype high altitude testing. Several unidentifiable, future models would have been under wraps in those lorry containers. 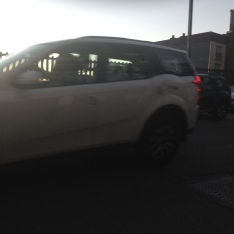 haps they were on their way to pick up a fleet of enigmatic white 4x4s, whose activities, it turned out, were rather more spied upon (by us) than spying.